HomeProjects AbroadCorona in the Global South

Corona in the Global South

How is the Corona Crisis changing the lives of people with disabilities in countries of the Global South?

Governments all over the world are taking measures to protect people from the Corona pandemic. It is important that these protective measures also reach people with disabilities and that they receive the necessary information. At the same time, these protective measures result in people with disabilities losing their sources of income and thus their livelihoods.

These days, we are receiving calls for help from our partners who, for example, would like to conduct training on hygiene measures in their village communities and buy hygiene products. In order to support our partners in this, we are dependent on donations.

Support our work by making a donation! (This link leads to a donation link with which you can donate directly to our work or use the account information on the right).

We also support our partner organisations Voice Ghana and Be The Change Foundation via betterplace with Corona emergency aid.

Voice Ghana is a long-standing partner of bezev. The self-advocacy organisation of people with disabilities campaigns for the rights of people with disabilities in Ghana. They support and accompany over 60 self-help groups in the Volta Region (in the south-east of Ghana). Voice Ghana does networking work with other organisations, and does education and public relations work on topics such as inclusion, gender equality, HIV/AIDS.

On 15 March 2020, Ghana reported its first case of the Corona virus. The government of Ghana has since taken measures aimed at raising public awareness to prevent the "introduction" of the virus. However, people with disabilities in remote and disadvantaged communities find it difficult to access information on how to protect themselves as part of the at-risk group. Another challenge is how to achieve 'social distancing' for those people with disabilities who rely heavily on support from others.

This is why Voice Ghana is trying to stay in touch with people with disabilities right now, educate them on prevention measures and support them with personal protective equipment and food. 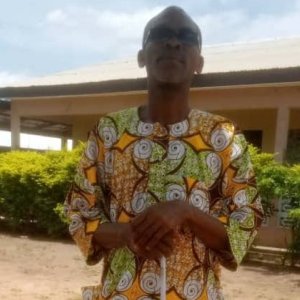 Be the Change Foundation in Elmina, Ghana

The official non-governmental organisation, which operates in Ampenyi, in the Central Region of Ghana, is committed to supporting children from families with poor backgrounds.

We are currently supporting the Be the Change Foundation in its work to educate the population about health and hygiene measures and to distribute masks and disinfectants to reduce the spread of the Corona virus among the population. Health workers conduct these awareness campaigns and consultations on hygiene measures according to WHO standards in the field. The organisation urgently needs donations for the purchase and distribution of protective equipment and hygiene items, such as masks and disinfectants, as well as for the medical equipment of a local health facility with hospital beds and oxygen equipment.

Donate to the work of the Be the Change Foundation

The non-governmental organisation Sri Mayapur Vikas Sangha is committed to the responsible welfare of women and children in the poor, rural areas of the Sri Mayapur region through education, organisation and empowerment.

Sri Mayapur Vikas Sangha (SMVS) supports 300 women's self-help groups, with about 3,000 members in total, including women with disabilities. Its aim is to promote the development of the region towards better conditions while preserving the natural and cultural heritage of the Sri Mayapur region in Nadia district of West Bengal.

Especially in the current Corona crisis, bezev supports the organisation SMVS in their work to protect local people in the Sri Mayapur region from Corona. The organisation urgently needs donations for the purchase and distribution of hygiene items such as masks and disinfectants. Education about health and hygiene measures is also a major concern for them.

Women with disabilities in India

Voices from Countries of the Global South

We want to give people with impairments/disabilities from the Global South a voice. That is why we let them have their say and report on their situation.

"Life is very difficult for me at the moment because those who helped me are now also restricted and have to isolate themselves. Fortunately, my family is still supporting me." Veronica Addy

"All the services I need because of my impairment have been stopped. This is very challenging in my situation. Before the Corona crisis, I received daily support from friends and relatives, but now everything is at a standstill, even our craft business is at a standstill. I can't earn a living anymore and I don't get any government support!" Kafui Adator

"I don't have customers for my handicrafts anymore and I can't travel to sell them either." Korkuvi Prosper

"Social barriers and discrimination against people with disabilities increased tremendously during the pandemic." Suzy Attipoe

"My employer currently has no more income because social gatherings have been banned. My current biggest concerns are unemployment and hunger due to the pandemic." Mispa Helu

"I feel more social exclusion because everyone is afraid to approach me when I need their services." Nikabo Rejoice 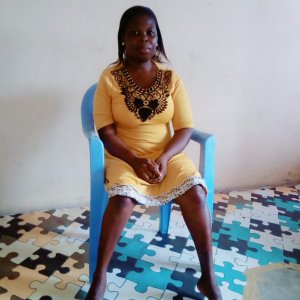 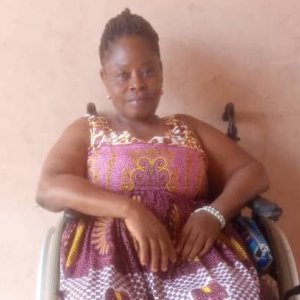 Voices from the Volunteers

"Mum, do you want me to bring you more toilet paper from Mexico?"
Ten weltwärts volunteers with and without impairments were evacuated prematurely from their placement sites abroad by the Essen-based association due to the Corona pandemic.

Kevin Kleiber had planned a 12-month voluntary service in Mexico, he even wanted to extend it by one year. Now the service in an organisation for people with impairments had to be ended prematurely after seven months. He is one of ten volunteers who completed their weltwärts voluntary service in Mexico, Ecuador, Peru and Ghana until mid-March and had to be brought back to Germany prematurely due to the Corona pandemic. This decision had been issued by the Federal Ministry for Economic Cooperation and Development (BMZ), which promotes the voluntary service, for all weltwärts volunteers sent to Germany.

For the volunteers, this was a challenging situation. After all, she didn't really want to go back and hardly had any time to prepare for her return, reports Hannah Stolp, a Ghana volunteer. Within a few days, she had to say goodbye and pack her bags. Kevin Kleiber, on the other hand, used his last day in Mexico to get his hair cut, as the hairdressers in Germany were already closed. On his last visit to the supermarket, he called his mother and asked, "Do you still have toilet paper, there's some here. Do you want me to bring you some?"

Arriving back in Germany has not been easy for Kevin Kleiber. "To be honest, I'm not doing well. It's a circumstance I can't get used to and don't want to get used to. I felt very comfortable in Mexico and also at home. Above all, I miss my autonomous everyday life there," Kleiber continues. It is also a strange feeling that he is now part of the risk group here, especially since he "only" has tetraspasticity, which does not cause any restrictions in the area of heart and lung function.

Kevin Kleiber is one of three volunteers with an impairment in this volunteer cohort of bezev. The association offers the volunteer service "weltwärts all inclusive". This is intended to enable young adults with and without disabilities to complete a voluntary service abroad.

Kevin Kleiber is currently involved with bezev and is taking Spanish lessons online so that he doesn't get out of practice. Other volunteers sew masks to collect donations for their former placement sites.

Lotta Segbers tells in the interview that she lived with her grandmother in need of care for a fortnight after returning from Ghana because the assistance had broken down. All the time, she is in contact with the new friends she made in Ghana via social networks. Uncertainty about the future is also high in the countries of assignment. But she reports that there was no panic there, as was sometimes felt here in Germany. The Ghanaian government, for example, closed the schools very early on, forbade handshaking and asked people entering and leaving the country for symptoms at the airport, even before cases of corona were confirmed in the country itself. For the pupils of the school for the hearing-impaired and deaf, where Hannah Stolp and Lotta Segbers worked, the situation due to Corona is not easy. Often no one in the students' families knows sign language, so the school is more than just a classroom for them. It is the place where they can make friends and communicate in their language. The local teachers try to find possible alternatives, but there is a lack of material and financial means to buy laptops for online lessons, for example.

Despite the involuntary departure, Kevin Kleiber wishes for recognition for "the achievement that the policy has made [...] and that people realise how good we have it, just because we live in Germany and are allowed to fall back on this health system."

All of the interviewees hope that they will soon be able to fly back to their places of deployment. It is currently planned to send the new generation of volunteers in autumn this year. However, this depends on the further development of the pandemic and will only be possible with a safe departure.

Hannah and Lotta with their friends at the airport in Ghana 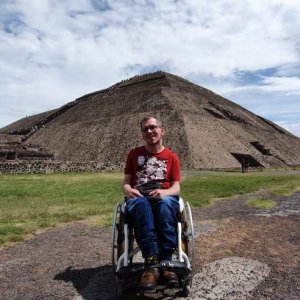 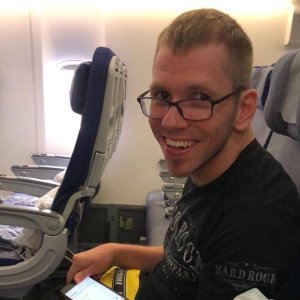 Kevin in the aeroplane 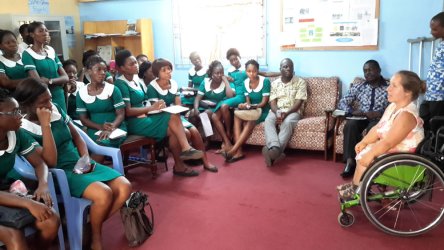 People with disabilities living in rural areas of Ghana have little or no access to education, the labour market, health care, etc. They are also excluded from society to a greater or lesser extent depending on their disability. Moreover, depending on their impairment, they are more or less excluded from society. Often there is simply a lack of information about the causes of disability and education about human rights.

Be the Change Foundation in Elmina, Ghana 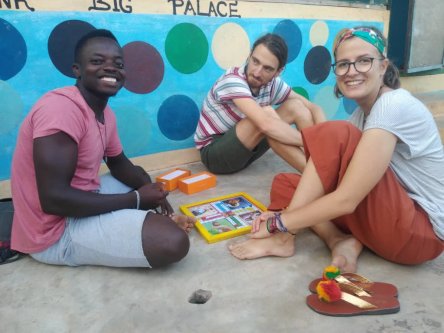 Children from poor families often have reduced educational opportunities. In turn, low educational and qualification opportunities reduce their chances of escaping poverty. This is a cycle that "Be the Change Foundation" tries to break. In addition to education, the organisation supports these children in meeting their basic needs.